The addition of another 4th division club to the area, where there hasn't really been much demand for more teams at that level beyond City and the Bucks, has caused a bit of frustration and distrust towards the league. The thought is plainly one of exploitation; they see how well followed City is and they must be looking to cash in on a region with that passion for the game.


I got in contact with the NPSL Chairman Andy Zarovich  to get the lowdown on how a club could conceivably enter the league as an expansion team.


"The process to become a new member works this way. An interested group contacts the league and then receives a prospective new member information package. This package outlines information about the league, the minimum requirements for membership and the requirements for application."
The deadline for expansion applications for the 2013 season was October 31 2012, with a presser coming out on November 3 revealing the applicants who had been successfully approved to join the NPSL. In that press release the league officially announced the arrival of Ferndale-based FC Sparta Michigan and southern Ohio outfit Zanesville Athletic to the Great Lakes Conference. They followed that up with another release that said just about the same thing but in a different order on November 4. Continuing on with the expansion process:
"Upon receiving an application, business plan and facility agreement from a prospective new member, a new member committee reviews the material to ensure that all items required for application are there. After this is met, the material is reviewed by the existing NPSL conference members where the prospective new member would be. For example, the existing members of the Great Lakes conference review the business plan, application, and facility agreement of prospective new members for their conference. As a matter of professionalism, the information contained in those documents is held confidential within the conference. Discussion and votes are held by the conference members. If the existing conference approves, then the applicant becomes a new approved member of the NPSL. This is one of the great features of the NPSL, allowing existing members the decisions on their respective regional and conference expansion."
It's great that the league calls for the members of a conference to weigh in on whether or not a team can join. This may not be novel in terms of professional sports leagues, but it's good to see in such a large and amorphous organization like the NPSL. Rather than holding an unwieldy vote amongst all owners, bringing the decision down to the local level allows the conference clubs to tell the league and prospective teams if it's prudent to even allow another club into the fold. Rapid growth is not the entire source of success.
What is unknown at this time is who among the GLC specifically voted to approve each of the 2 new franchises, and if the decision was unanimous in either case. There is a specific question that I find myself wondering, and it's a question that we may never have answered:
Did Detroit City approve the membership of FC Sparta? 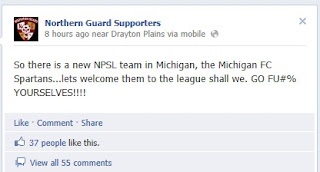 They certainly had the chance to vote down a local rival with the potential to steal away a portion of its fan base. The tepid response to the new club by Detroit City fans indicates that this largely won't be the case. Was this all a ploy by the league to get some more money?
If City did approve, could the proximity of a new club be a factor in approving the new local rival? After all, it's cheaper to charter a bus to go a few miles uptown rather than all the way out of state.
Is it possible that the other 3 members of the GLC wanted to see the area weakened with greater local competition for both talent and fans? If the voting doesn't have to be unanimous, then that could certainly have been the case.
How much of the decision making is done over the course of these meetings, and how much (I hate to use the term) lobbying goes on between clubs? Is the process of voting more of a formality?
Is this all just paranoid bullshit?
I can answer at least one of those questions,
It's official.
Posted by D Cubed at 2:28 PM 3 comments: 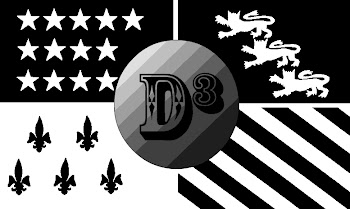 D Cubed
Building a soccer community brick by individual brick. Thanks for checking us out